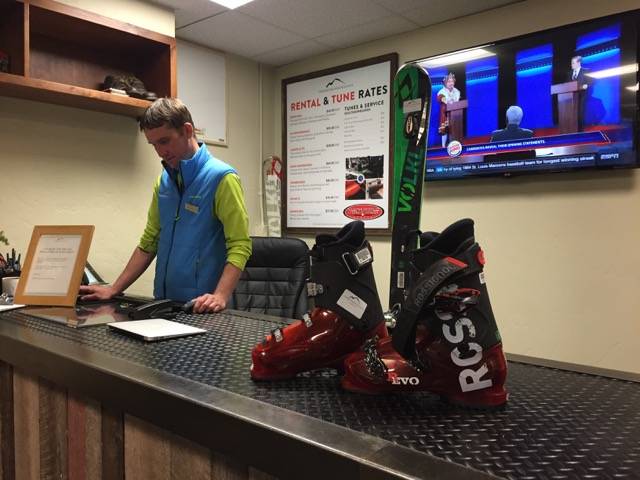 OK, full disclosure right at the start. I own a ski shop and have been accused in the past (understandably so) of being a ski snob. If I have to choose between skiing on un-tuned skis or not skiing at all, I will choose not to ski. I’m also, shall we say, a bit “particular” when it comes to my boots. I am by no means a World Cup skier, but I don’t totally stink either. Probably the most fit description of my ability (or lack thereof) is that people who don’t know how to ski think I totally rip and people who rip laugh at me!

Everybody I work with has been grinning from ear to ear raving about how amazing the snow is. “Best opening in a decade…” “Full-on powder runs in November…” “Nobody on the hill…” As a general rule I never ski until after the Christmas season because I’m just too busy, but I looked at my schedule this morning, realized I had a window and decided what the heck, I’ve been doing this ski shop thing for almost 25 years, surely I can make a few runs without getting fired!

So imagine my conundrum this morning when I show up at my shop in Bachelor Gulch ready to make my first runs of the season and my boots are nowhere to be found. I generally use a very stiff race boot and was pretty upset that my day was ruined because I wasn’t going to ski a rental boot. Sensing my frustration, Jason and Steven turned to me and asked me why I didn’t just go out on our rental setup.

10 minutes later I was sitting on the Bachelor Gulch Express chairlift (all by myself because there were literately about 15 people on the entire mountain) in a brand new pair of Rossignol Evo boots and a 2015-16 Volkl RTM 84.

My first impression? Wow, rental boots are warm and comfortable. Given that the temperature was a blustery 8 degrees, I was happily surprised that I could actually still feel my toes when I got to the top of the chair ride. I only did 4 runs but I was totally blown away at the performance of my gear. The skis truly didn’t surprise me that much as I knew this was Volkl’s top of the line model, so I was expecting it to perform like a full blown race ski – which it did. Granted I was skiing on perfect corduroy, but nevertheless the ski felt incredibly responsive, stable at any speed, very predictable, and at home no matter what I threw at it. But again, this is a true flagship demo ski, so I was quite honestly thinking this is what I was going to get.

The boots, however, really got my attention. I haven’t skied in a rental boot in at least 15 years. It was worth the wait! The Rossi Evo was uber comfortable but plenty tight to allow me to really lay into the ski. I tried leaning way too far back and way too far forward and the boot handled both just fine. I jumped off the side of a run into some chopped up powder and the boots were totally at home there as well. We often hear from customers that they are concerned about the performance of a rental boot. Well for my experience, the Rossi Evo will not disappoint you.

So buckle up, hit the hill, and charge!

Wax While You Worship, Relationship Building While Biking and Skiing in Vail
Next Article